The Lambeth Loyal Volunteers and the Independent Lambeth cavalry were typical of the many volunteer militia units that formed around the country in response to fears of a French invasion, and tacitly, in response to the political radicalism that had been engendered by the French Revolution.  The Lambeth Volunteers were funded by public subscription, and their activities ceased when there was no further public enthusiasm to support them; the minutes of their last meeting note that the subscriptions are exhausted and resolve to call on the parish for more funds. The Independent Lambeth Cavalry were captained by John Astley, son of Philip Astley who founded the eponymous circus on Westminster Bridge Road.
The Parish of Lambeth stretched South from the River Thames in London bordered by the parishes of Clapham and Streatham to the West, Croydon to the South and Christchurch, Southwark, Newington and Camberwell to the East. 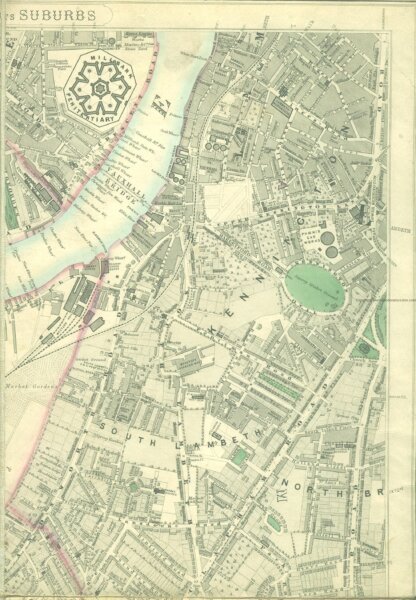 Original Description of the unit from 1799:
No. VIII.
LAMBETH LOYAL CAVALRY
COMMANDER, MAJOR BARRETT
This Troop was formed at the same time with the Lambeth Loyal Infantry, commanded by Sir Robert Burnett, Knt. and are in all respects under the same regulations as the Infantry. * They have been reviewed and gave the greatest satisfaction with respect to Discipline and Military Appearance.
They received their Standard from the hand of Mrs. Burnett, Lady of Sir R. Burnett, on the 22d of September 1799, in a field near Vauxhall Gardens.
THEIR OFFICERS’ ARE:
Major Barrett, Commander; Captain, James Scott. Lieutenant, Richard King; Cornet, Enos Smith; Adjutant, – Swallow.
* See No. XLI.