With the £ the lowest it has been against the US$ (among others) for 50 years there has never been a better time to buy products sold and shipped from Britain - especially these! And shipping costs are in £ too! Dismiss

The map (click on it to expand) shows the boundaries of Broad Street Ward in 1720 (in red) before the fields to the North of London Wall were developed and  incorporated into the Ward. Broad 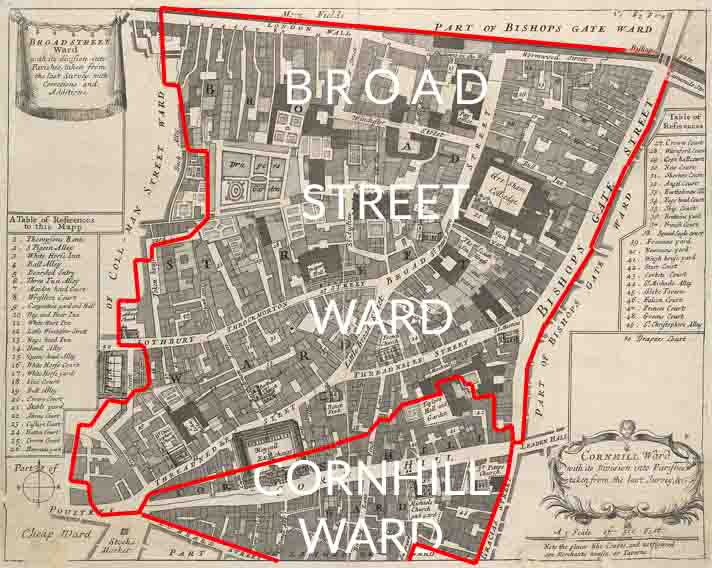 Street is one of the 25 ancient wards of the City of London. In medieval times it was divided into ten precincts and contained six churches, of which only two, St Margaret Lothbury and All Hallows-on-the-Wall now survive: St Bartholomew-by-the-Exchange was demolished in 1840, St Benet Fink in 1844, St Martin Outwich in 1874 and St Peter le Poer in 1907.[4]

The ward’s northern boundary along London Wall and Blomfield Street borders Coleman Street ward, before curving to the north-east along Liverpool Street, the division with Bishopsgate. From here, Old Broad Street runs south-west along the border with Cornhill where it joins Throgmorton Street, its southern boundary – to the south of which is the Bank of England in Walbrook ward. The western boundary follows a series of small courts and alleys adjacent to Moorgate and then runs up Copthall Avenue. A busy commercial area it also contains two livery halls of the Worshipful Company of Carpenters and Worshipful Company of Drapers. Like many of the City wards it has a social club for people who work in the area, which celebrated its 30th anniversary in March 2006.
At the top of Old Broad Street, adjacent to Liverpool Street station, was Broad Street station which closed in 1986 – the only major terminus station in London to have permanently closed.

Original Description of Unit from 1799:
THIS Association was originally formed in November, 1797, under Richard Clarke, Esq. then Alderman of the Ward; when it was resolved, “That they should not accept pay; and provide clothes, arms, and accoutrements at their individual expence; and serve within the city of London only, unless by their own consent.”
This Corps at present consists of two Companies of sixty each; and had its Colours presented the 3d of October, 1798, by Mrs. Gregson, in the East India Company’s ﬁeld at Hoxton. Their Committee is elected by the Inhabitants of the Ward and consists of the Ofﬁcers and sundry other Members.
OFFICERS’ NAMES:  Major Commandant, John Perring. First Company, Captain, Henry Blaxland; Lieutenant, John Hollingworth; Ensign, Jesse Gregson. Second Company, Captain, Vincent Jos. Rivaz; Lieutenant, Thomas Marriot; Ensign, George Revell.
DRESS: Helmets were originally Silver, now gilt; the Label, BROAD-STREET WARD ASSOCIATION. Ornament, on right side ditto, G. R. within the Garter, and Crown at top. Breast Plate, oval, with a Crown, and B. S. W. A. under it, &c. Buttons, A Crown, with Broad Street Ward round it. Short Gaiters.