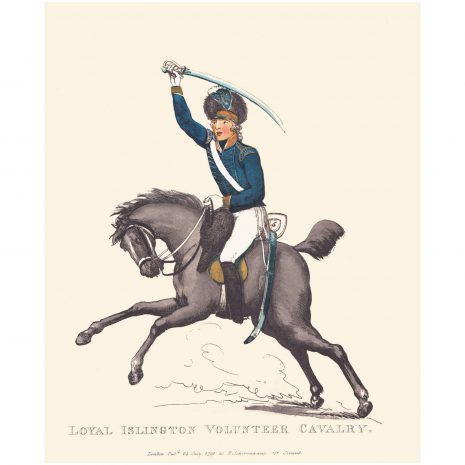 This respectable Corps of Cavalry was first formed under the direction of P. Anderdon, Esq. immediately after the Enemy presumed to land upon the Welch coast, and was the first to be completed for Service. The Standard was presented to the Troop in the Spring, 1799, by the hand of Mrs. Anderdon, and at the sole expense of that Lady.

She took the silken Prize, and with a smile (The loyal Troop attentive all the while)

“Nor less esteem it from a Female hand;

“Beneath its blaze our sacred Rights maintain,

“Nor let dishonour tinge it with a stain;

“Remember still-they fight in Virtue’s cause,

“Who guard their KING, their LIBERTY, and LAWS!”

This said, a plaudit roam’d the air at large,

For there was inspiration with the charge.