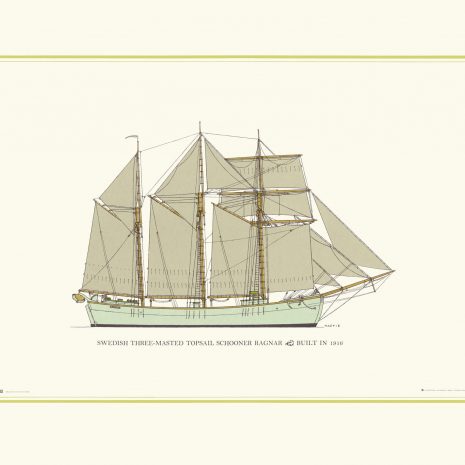 A schooner is a type of sailing vessel with fore-and-aft sails on two or more masts. The most common type has two masts, the foremast being shorter than the main. While the schooner was originally gaff-rigged, modern schooners typically carry a Bermuda rig. A fore-and-aft rig is a sailing rig consisting mainly of sails that are set along the line of the keel rather than perpendicular to it. Such sails are described as fore-and-aft rigged. Schooners were popular on both sides of the Atlantic in the late nineteenth and early twentieth centuries, long dominating yacht races such as the America’s Cup, but gradually gave way in Europe to the cutter. Schooners were used to carry cargo in many different environments, from ocean voyages to coastal runs and on large inland bodies of water. The cargo ship was sunk in the Atlantic Ocean 100 nautical miles (190 km) north of Cape Finisterre, Spain (44°56′N 8°38′W) by SM U-49 (Imperial German Navy). Her 21 crew were rescued by Leda ( Netherlands).