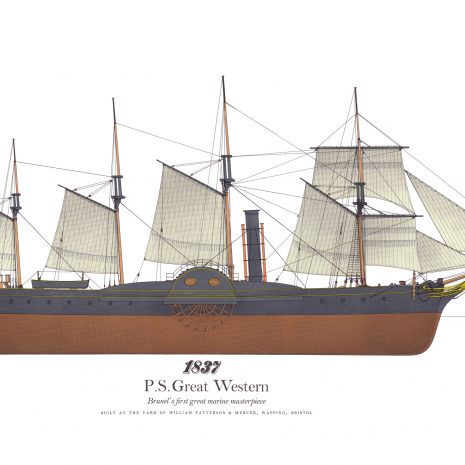 The SS Great Western was to be an extension of Brunel’s Great Western Railway: passengers from London to Bristol by train and on to New York by ship. The Great Western had an iron-bound oak hull, two decks, four masts, a single steam funnel and a figurehead in the shape of Neptune. Built by William Patterson at Wapping Wharf (now Prince’s Wharf) in Bristol, she was the largest steam ship. Her keel was laid on 28th July 1836. When launched in 1837 she sailed to the River Thames in London to be fitted with 2 side-lever steam engines and four flue-type boilers. The engine room was 24.5m long and the engines generated 560kW. She had sails for auxiliary power and, in rough seas, to steady the ship. She competed successfully for the blue riband and completed 45 transatlantic crossings in eight years. In 1846 she was laid up in Liverpool before sale to the Royal Mail Steam Packet Company for £25,000 in 1847 (apparently to pay for refloating Brunel’s SS Great Britain that had run aground off Ireland). She then plied between Southampton and the West Indies for the British Royal Mail. During 1854-55 she was used for troop transport in the Crimean War (1853-56). The Great Western was scrapped in October 1856 on Baltic Wharf by the Thames at Vauxhall, London.