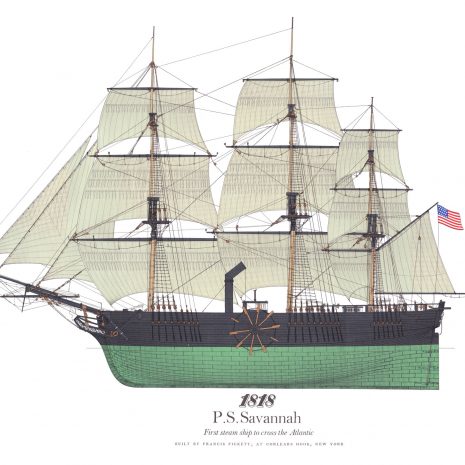 Built in 1818 SS Savannah was laid down as a sailing packet at the New York shipyard of Fickett & Crockett. While still on the slipway, Captain Moses Rogers persuaded Scarborough & Isaacs, shippers from Savannah, Georgia, to purchase the vessel, convert it to an auxiliary steamship and win the prestige of inaugurating the world’s first transatlantic steamship service. SS Savannah was an American hybrid sailing ship/sidewheel steamer notable for being the first steamship to cross the Atlantic Ocean, mainly under sail power, from May to June 1819. Despite this historic voyage, the space taken by her engine and its fuel at the expense of cargo, and the public’s anxiety over her revolutionary steam power, kept Savannah from being a commercial success as a steamship. Following a severe reversal of fortune of her owners, she was converted back to a sailing ship after returning from Europe. She was wrecked off Long Island in 1821. No other American-owned steamship would cross the Atlantic for almost thirty years after Savannah’s pioneering voyage. Two British sidewheel steamships, Brunel’s SS Great Western and Menzies’ SS Sirius, raced to New York in 1838, both voyages being made under steam power alone.